“If something is discernible, you can discern it – you can see it, smell it, taste it, or otherwise tell what it is.” (www.vocabulary.com)

It is probably true… that effective leaders and exceptional teachers have the ability to deliver discernible difference (improvement). It is this ability and awareness to focus in, move to action and deliver a discernible difference that stands these people out as great leaders and teachers. They have the ability to rationalise, prioritise, simplify, see the important, dismiss the clutter and move effortlessly and quickly to…

…secure meaningful improvement in areas that will leverage the most impact and improvement… triggering and delivering change that is both discernible and sticky…maybe even irreversible.

Perhaps… we should seek to tell stories and build narratives of improvement in identified areas or on trails where we deliberately place bets to transform practice and deliver discernible difference.

Which begs the question… what does it take to deliver discernible difference? How can we be more deliberate and focused on singling out the key levers of improvement; executing these changes, building a story and telling a narrative of improvement around the few things that matter?

“What’s the ONE Thing you can do such that by doing it everything else will be easier or unnecessary?” (Gary Keller)

What if… great leaders and teachers understood that what you do not do, what you de-prioitise (the omissions) are as important as what is actioned? …that ability to place bets only on what counts and the mindset that reduces  crippling complexity and workload?

What if… we realised that trails and areas requiring improvement are often obvious and rarely require deep evaluation to be understood?; seek the trails that matter… 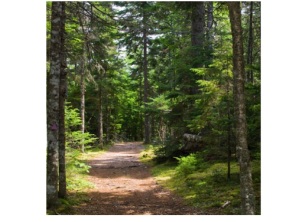 What if… we spend too much time evaluating and applying QA to the whole population or provision instead of moving more quickly to action on the areas that require improvement; seeking discernible difference?

What if… we also realised that in any population there are outliers, bright spots and positive deviants who have that answer or exhibit behaviours that have the ability transform? …achieving discernible difference and improvement will often be within the population… seek the wisdom and grow it… 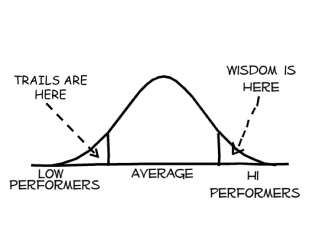 What if…we were more aware of the fact that we can get over-excited or be prone to complacency when we measure and weigh stuff? That feeling we get when we complete the SEF, a round of observations, work scrutiny, achievement meeting, re-writing our to-do-list etc. – often confuses us into thinking we have achieved impact or improvement?

What if…we are prone to believing that things will just improve, or that if we apply a strategy more, or if we weigh stuff more, that we will achieve a different end point?

Insanity is doing the same thing over and over and expecting a different result.” Albert Einstein

What if… we only focused on the key trails and moved to action. What if… we are not quick enough to move to action (to start stories) and as a consequence rarely achieve the change that we desire and others need…

What if… we do not continue to commit to action during the implementation dip or when it is easier to go off and measure something else or when we can duck the difficult conversation or action? 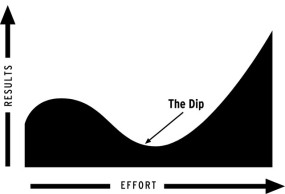 What if… we were in the habit of telling stories; and building a narrative of improvement? … around those areas that we have prioritised, that will have the greatest impact and deliver discernible difference?

What if… a self-improving education system or academy or teacher has the ability to understand the brutal truths of the situation and embark on a set of deliberate actions that together tell a story and provide a narrative of improvement? 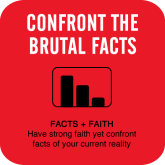 What if… these stories always have a start, a middle and an end…

What if… we are good at opening up stories, but much weaker at building plot and poor at writing great endings (happy or tragic)? What if… we do not stick around long enough on a story or move to action quick enough to realise the twist or truths or barriers to improvement that exist?

…stories motivate people to achieve more. They show what is possible and trigger other unintended improvement. 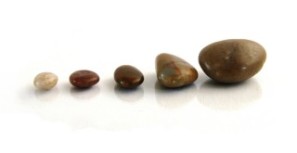 What if…this ability to place bets on the stuff that matters is born out of an acute awareness and a lack of organisational blindness achieved from beyond our present context (Academy, classroom, MAT, region…) 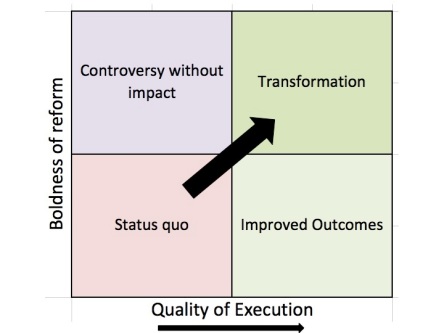 …ensure that the choice architecture, nudges and culture provokes and rewards individuals and teams to chase their own narratives of improvement, growing the ability to tell stories of discernible difference.

Maybe then… leaders and teachers would move to action more quickly on the few things that matter – placing bets on the one thing(s) that make a discernible difference. Maybe this… level of focused action has the ability to add far greater value than blunt, catch-all, self-evalution.

What are your trails? where is your discernible difference? what stories of improvement can you tell – where have you achieved irreversibility? Has this become the lens through which you seek future improvement?

After all… the measure of our own impact should be judged through the stories of discernible difference that we can tell.

It is probably true that… in education change often fails to stick. That academies and schools are full of initiatives and good intentions; strategy and initiative-rich environment that drives up complexity and confusion.

It is also probably true… that education and schools would be more effective if we understood the dynamics and nature of change; understanding how to deliver change that sticks, is sustained and irreversible.

“Success is not a random act. It arises out of a predictable and powerful set of circumstances and opportunities” (Malcolm Gladwell)

What if… we understood that coerced, sustainable and irreversible change delivers different outcomes?…

…considering executed change in schools it is easy to find examples of each.

What if… change is pointless unless it achieves improvement – too much change gets to the same point, but wastes both time and effort… and worse damages the credibility of leadership, increasing the likely resistance to future change.

What if… successful change in schools secures changes in behaviours and habits so that change become habitually delivered and irreversible.

What if… Stephen Tierney is right in his recent blog that leaders and teachers make better decisions when they think slow and not fast?…

“Too many people are working and in some cases essentially living in an organisation where busyness, for its own sake, is seen as a virtue.  In Thinking, Fast and Slow, Daniel Kahneman explains his theory about two modes of thought; System 1 (fast, automatic, frequent, emotional, stereotypic, subconscious) and System 2 (slow, effortful, infrequent, logical, calculating, conscious).  While System 1 helps us survive in the jungle it is System 2 which is likely to be of greater benefit in addressing complex issues.” (Stephen Tierney, blog)

What if… most of the change instigated in schools (and education) has not had enough thought? What if most change fails to consider…

What if… we really understood that the real success of any change lies in the execution? And that regardless of the boldness of the desired change this is what makes change stick and be successful?

What if… we altered the matrix to consider the inter-play between the level of energy and impact of change – highlighting the difference between coerced, sustained and irreversible change… the amount of energy required for irreversible change declines after initial execution due to shift in habits and behaviours.

What if… KISS (keep it simple stupid) was a key driver to ensure that change is always targeted, simple and focused. What if we used members of the team to wear de Bono’s Black Hat, identifying and challenging complexity.

What if… some individuals and organisations suffer from initiativitis – the disorder that compels, otherwise good people, to launch initiative after initiative. It is all on the slow thinking, deliberate execution and persistence cubed that secures successful change. No one benefits from a thousand flowers blooming.

What if… John Collins is right, we should fire bullets before cannonballs? Testing first, or piloting change before scaling?

What if… Seth Godin is right and that we should beware the implementation dip of change? How often do schools change direction or abandon in the dip only to initiate a new approach. 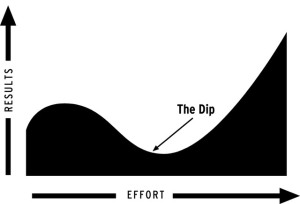 What if… we recognised when to stick and when to twist – that one requires maintenance of faith that the thinking and execution will yield results and the other a realism and calculation of future effectiveness to identify where there is futility of effort?…

“Persistent people are able to visualize the idea of light at the end of the tunnel when others can’t see it.  At the same time, the smartest people are realistic about not imagining light when there isn’t any.”  (Seth Godin)

What if… too often we launch change with one or more of these missing?… (VISION, SKILLS, INCENTIVES (understanding the WHY), RESOURCES, ACTION PLAN)

What if… launching change after change is the same as crying wolf? That initiative fatigue sets in quickly where individuals realise that this is just one of those band-wagons that continually pass?

What if… we do not fully consider the choice architecture of any change? and fail to see, understand and use nudges to secure irreversible change?

leaders are choice architects; determining the environment in which noticed and un-noticed features influence the decisions that staff and students make. Leaders have the ability to influence behaviours, create social epidemics and use “nudges” to influence individual and group behaviour. We are surrounded by nudges; good leaders see them, look for them and use them (often automatically)

What if… the art of leadership and leading change is in the ability to de-priortise what is important? What if… we used this phrase regularly to focus the ONE thing.

“What’s the ONE Thing you can do such that by doing it everything else will be easier or unnecessary?” (Gary Keller)

What if…successful change taps the emotions? and has a stickiness factor?…

““the stickiness factor”, is a unique quality that compels a phenomenon to “stick” in the minds of people and influences their future behaviour.”

What if… Jim Collins is right that great organisation focus their time and energy on turning the flywheel. What if… this means that in schools we actually only need to get a surprisingly few things right to drive improvement. – placing bets on the few things that leverage improvement. A function of conscious choice and discipline (…to execute)

Maybe then… we would have a deeper understanding of change. We would not drive initiative after initiative that fail to stick. We would recognise that less is more and that the success of any change is linked to making conscious choices through slow thinking, using deliberate discipline to execute and the persistence to secure the change.

Maybe then… leaders and senior teams will employ slow thinking to place bets on a few changes or approaches that leverage the greatest improvement. That we would be more professional and intelligent whenever we seek change so that we more often deliver sustained and irreversible change.

… all of this will remove complexity and allow leaders and teachers to deliver change and improvement in a focused and deliberate way… bringing a structure and an intelligence to academy improvement so that we can make stuff happen.